Centric to Nepal’s agenda for food, water, energy, and socio-eco stability for its communities is its sustainable livelihoods program that builds on and promotes peoples’ strengths, skills, assets, and potential. The programs will ensure a livelihood for the people inhabiting protected areas, their surroundings, and other priority sites; it aims at also reducing pressure on natural resources on which they are dependent. Emphasis on eco-tourism is one of the key drivers of this agenda.

The beautiful, forested areas of the Terai are the delightful setting of the Chitwan region. It is renowned worldwide for the Chitwan National Park, along the outskirts where lie settlements of the ethnic community, the Tharus. A visit to the village opens up very interesting narratives of the origin of the Tharus, their cultural persuasions, and their immersive relationship with the forested environs. Folklore reveals that the original descendant hailed from Rajasthan in India. In the 16th century, the womenfolk are said to have found refuge here whilst waiting for their menfolk to return from battle with the Mughal forces. As most of the men were martyred in their cause, the women made peace with their fate and married into the local community. From this union emerged a unique cultural ethos, which has survived the march of time. As you take a guided exploration of the village, you will also discover much about the community’s culture, religion, and language. You will also learn more about the architecture and handicrafts traditions. The walls of the house feature pattern in handprints, reminiscent of villages in Rajasthan. Enjoy a hands-on experience of cooking and sharing a meal and then savor the rich nuances of its music and dance traditions. 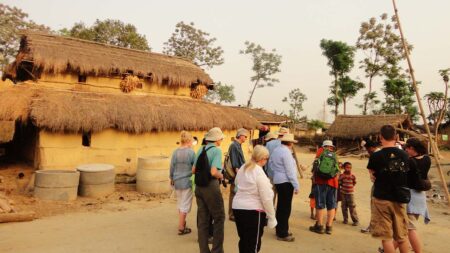 A Tryst with Elephants

You will love a relaxing day with these gentle giants, now retired from active life, as you follow the rhythms and routines of their daily world in these sheltered environs. Get ready for a fun-filled uplifting ethical experience as you join in on this jungle walk with the elephants and their mahouts. Accompanied by a naturalist, you will learn all about wildlife and the botanical wealth of the environs they inhabit. You can watch the elephants being bathed in the river and enjoy photoshoots of them playing in the water. Later, watch as they settle down to sleep inside the corrals at night. Try not to be noisy around them as they rest.

While elephants have played an important role in Nepali culture, be it for transport or ceremonial occasions, there is a growing awareness of the need for a more sustainable eco-friendly connection with these behemoths in the area of tourism in recent times. 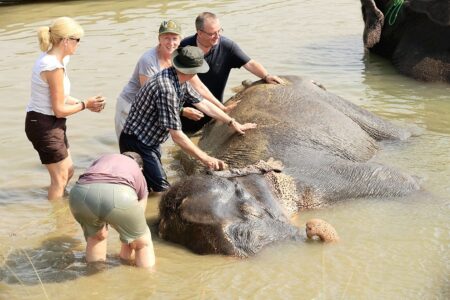 The Shivapuri Nagarjuna National Park, also known as the Shivapuri Watershed and Wildlife Reserve, is a magical place for an eco-friendly visit. A botanical wonder, it is beloved for its outstanding ancient forests of oak, pine, rhododendron, moss, and lichens, and stands of bamboo. You will spend many memorable moments on this trek, which trails through the second highest hill in the Kathmandu Valley. It’s an excellent opportunity to soak in the beauty and challenges of trekking through the Langtang Himalaya. Birders, in particular, love the experience as it’s a birding paradise par excellence with over 177 species of birds, of which at least nine happen to be threatened species. Accompanying you on the trek is an Everest summiteer who will bring along his cache of stories to enhance this eco-adventure. Trekking routes to Nagarkot, Gosaikunda, Helambu, and Langtang National Park also pass through the park. 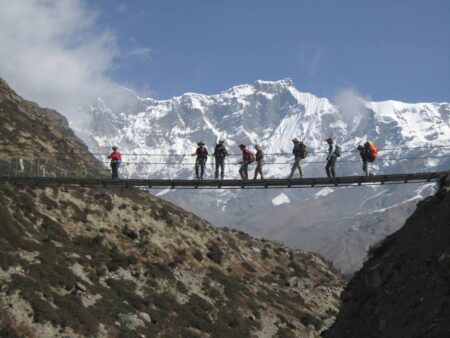