Visiting Puducherry or Pondicherry is like having a little European holiday without leaving India. Cobble-stoned streets are lined with colonial style buildings and bright bougainvillaea blooms. It’s easy to think you are in France but thankfully, the rest of India is not far away. Settled by the French in 1674, the city’s history was tumultuous until the French gained full control in 1814 and made Pondicherry their Indian base. In 1964 it became a Union Territory of India, but the French influence has remained. 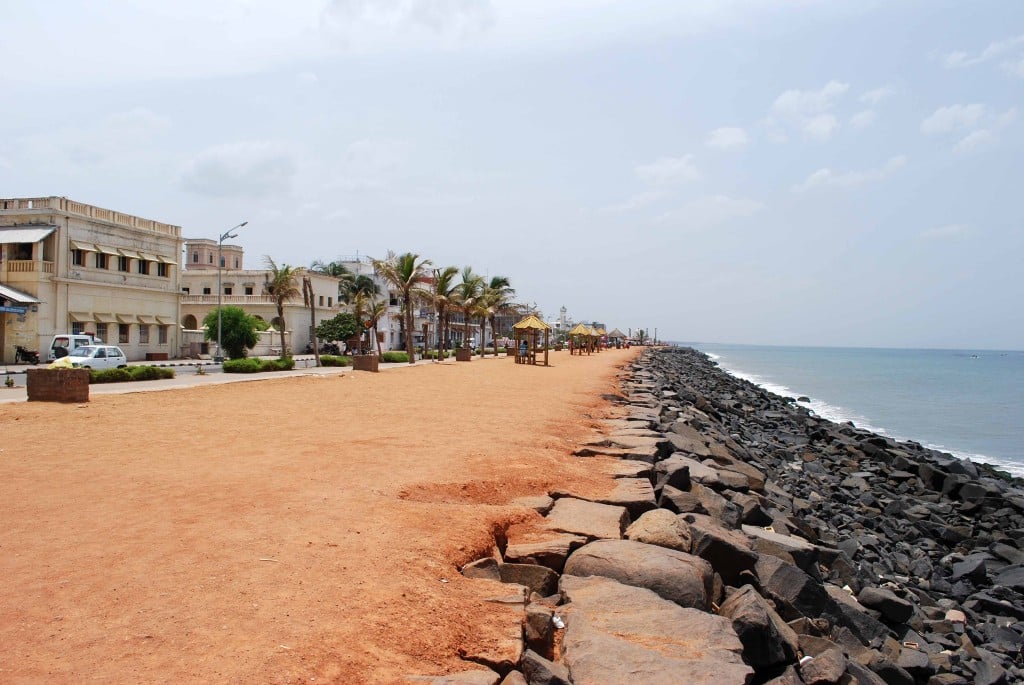 The Promenade in Pondicherry, Photo Courtesy of Sanyam Bahga via Wikimedia Commons

Pondicherry is actually divided in two. There is the French quarter that borders the sea and the rest is distinctly  South Indian. A canal runs down the center of the town and divides the two regions. Most of the interesting sites are in the quieter French quarter where it’s easy to get lost amidst the cobble-stoned lane ways.

Pondicherry is the city of Churches, the most impressive is Our Lady of the Immaculate Conception with bright blue doors and a white and gold exterior.  Towards the sea the Church of Our Lady of Angels is best visited in the afternoon when the sunlight hits the rose pink exterior. At the southern end of town is the striking Sacred Heart Basilica. Its Gothic architecture has dramatic brown and white hues. But the real reason to visit this church, is to see the stunning stained glass windows that tell the story of major events in Christ’s life.

Effortlessly blending west and east, dotted along the seaside promenade are statues of Nehru, St Joan of Arc, a French War Memorial and the magnificent Gandhi Statue shaded under a canopy and flanked by a semi circle of stone columns. Nearby the Pondicherry Museum is packed to brim with beautiful French antique furniture, bronze statues from the Chola Era and ancient Greek pottery, hinting at the many different people that have ventured into this trading port over the centuries.

The Gandhi Memorial, Photo Courtesy of Nithi Anand via Flickr

The Aurobindo Ashram is just around the corner, and as created by Bengali Sri Aurobindo Ghose and a French woman known as The Mother. Visitors are allowed inside the Ashram to view a memorial to Aurobindo and The Mother and join meditation, yoga and lectures on Aurobindo’s teachings. Nearby is the Manakkula Vinayakar Temple which is dedicated to Lord Ganesh and adorned with a decorated elephant that patiently stands out the front to greet pilgrims. The temple was here long before the French arrived, and has withstood several attempts to demolish it. 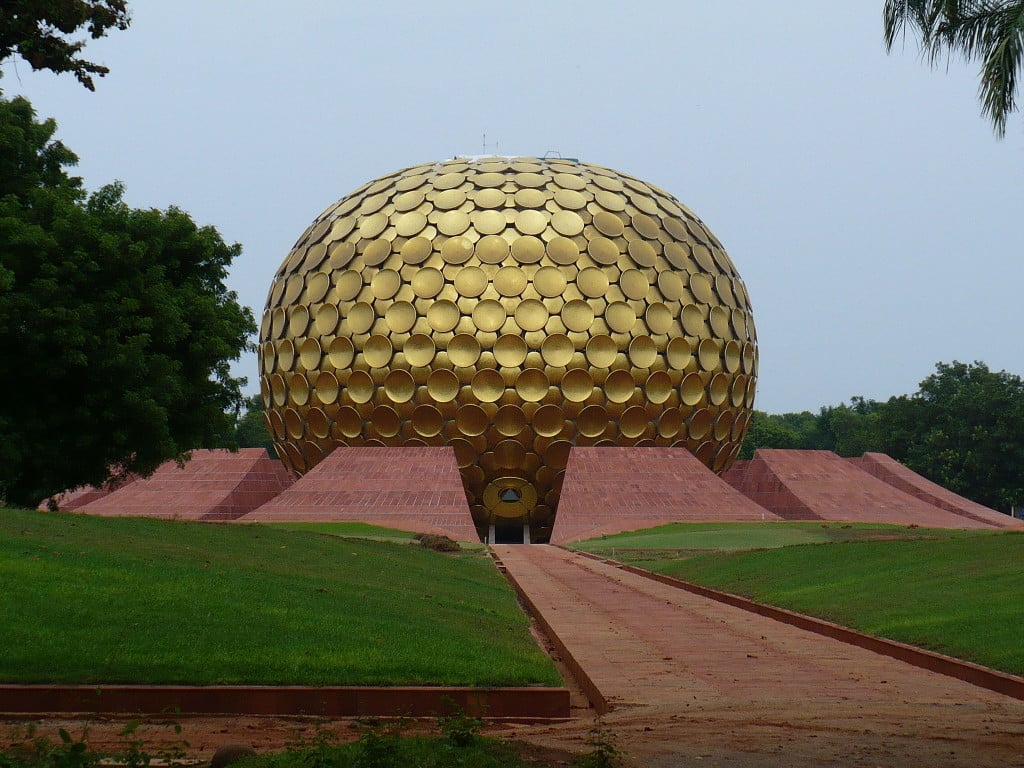 The Auroville Matramandir, Photo Courtesy of Indianhilbilly via Wikimedia Commons

About 10 kilometers from Puducherry is the township of Auroville. Just over thirty years ago this verdant haven was barren land, but now it’s considered by some to be the closest thing on earth to nirvana. Inaugurated in 1968, Auroville is the vision of The Mother, a French national who devoted her life to the exploration and pursuit of spiritual development.

What makes Auroville unique is that it’s not owned by any one or place; it belongs to no one in particular. It has relied on support from both the Indian government and the international community. The township is built in a circular shape, with roads curling around its center like the shell of a snail. At the heart of Auroville is the Peace Zone, and its crowning glory is the Matrimandir.  While short stays in Auroville are not permitted, day-trippers from Pondicherry are able to enter the visitor’s center and view the Matramandir from a special platform. This impressive architectural structure looks like a gigantic golden golf ball, reflecting the sunlight. It is a place for meditation and reflection. Its interior is made of white marble with a large crystal that diffuses sunlight throughout the chamber.

Pondicherry is located only a couple of hours from Chennai and Mamallapuram, and is the perfect place to explore for a few days. Enjoy croissants, browse through antique stores and take a little European mini-break.